Fourteen students from the Fordham Honors program present their original research and interpretations of twenty-eight objects, artifacts, or commodities that changed Early Modern History. Join us for a tour of Europe and beyond, 1450-1799. 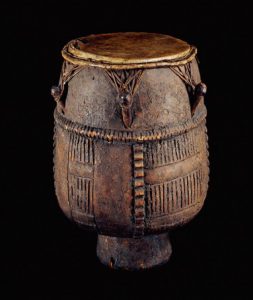 PROVENANCE: Thought to have been made by the Akan people of present day Ghana; brought to America aboard slave ship; obtained in Virginia by the Rev. Clerk on behalf of British Collector Sir Hans Sloane; part of founding collection of The British Museum, 1753.

This drum originated from West Africa in the Akan region of Ghana and was brought on a slave ship to the Virginia colony c. 1735. It is one of the oldest surviving African-American objects. While the carved wood is from the cordia africana, a tree from West Africa, the deer skin is North American. This indicates that the drum was used in its new home.

Drums have played a central role in Africa throughout history. Generally the sound of the drum was an announcement, such as declarations of wars or celebrations. In his autobiography The Interesting Narrative and Other Writings the formerly enslaved African Olaudah Equiano described Africa as a nation of dancers and musicians and emphasizes the use of drums. Within a community where everyone speaks the same drum language drums can have rhetorical impact. Since drum language is specific to a community and only accessible to ‘in-group’ members, drumming contributed to the formation of personhood and group identity.

Slavers were likely to lose up to one-half of their human ‘cargo’ during the middle passage. It was in their economic interests to keep the slaves alive and healthy. The Akan Drum was likely used in the practice known as ‘dancing the slaves’. Ship doctors believed nostalgic melancholy was the cause of diseases and recommended dancing as an antidote.

The threat of violence under which slaves ‘danced’ turned music and dance into tools of subjugation. Slavers made the dancing into a form of entertainment for personal enjoyment. The ship captains’ declarations that ‘white men’ had to be obeyed enabled the slavers to use the rich legacy of African drum-dance culture to create and image of blackness and whiteness, in which blacks were the subjugated and whites the subjugators.

Female slaves were kept on the main deck of the ship where they were vulnerable to the sexual predation of the slavers. The forced dancing became a twisted form of foreplay for rape. Refusal to participate resulted in severe punishments. A young African girl on the slave ship Recovery was tortured and killed for refusing to dance. In the complete annihilation of the ‘cargo’ the slavers went against their economic interests. The girl denied the slavers power and pleasure by rebelling against the racial script of subordination they had written for her. The slavers had to destroy her in order to take back control of her body.

The use of African music, dance, and instruments on the slaves ships allowed slaves to preserve homeland traditions. Dance became an integral part of the daily lives of slaves in North America. During Saturday night dances slaves would dance to the beat of the drum and talk about the freedom they had possessed in Africa. Dance practices of the slaves became intertwined with resistance and survival.

Music and dance culture of the slaves contributed to the formation of group identity and self-esteem. This threatened the system of slavery, which relied on the complete oppression of slaves. Masters’ fear of the communicative power of drums was confirmed by the Stono rebellion of 1739 in which rebels used a drum to signal each other. Slaves were subsequently banned from using drums.

The same drum which beat for subjugation could beat for rebellion. Slavers manipulated the culturally vital African Drum to subjugate black slaves through dance. The power of an instrument like the Akan Drum to communicate and unify persisted from Africa to North America. The drum became a double edged sword which slavers used to subjugate slaves and slaves used to rebel against the system of subjugation.

Cruikshank, Isaac. The Abolition of the Slave Trade Or the Inhumanity of Dealers in Human Flesh Exemplified in Captn. Kimber’s Treatment of a Young Negro Girl of 15 for her Virjen (sic) Modesty. 1792 April 10. Etched Print. Library of Congress, Washington D.C. In Ring Shout, Wheel About. Champaign: University of Illinois, 2014, 43.